Binge Eating Disorder Symptoms And Characteristics To Be Concerned About 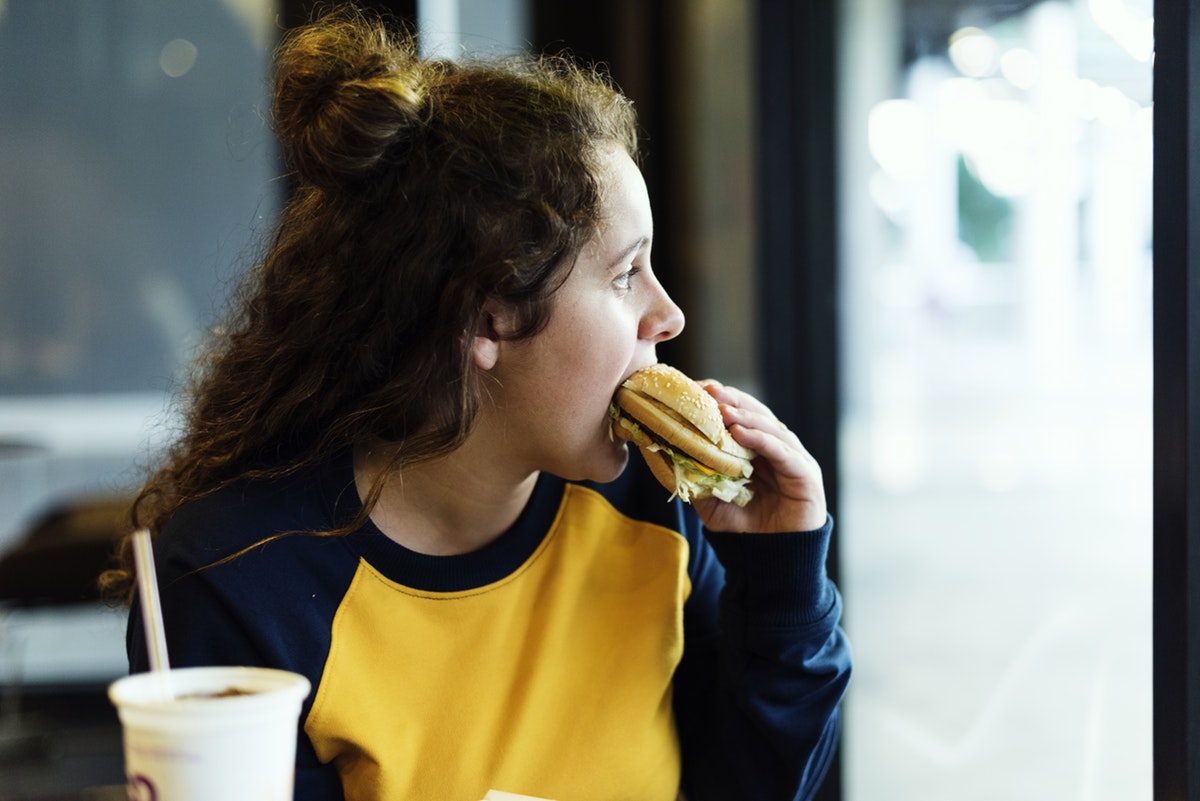 If you had not heard of Binge Eating Disorder, you are not alone. Many people are not familiar with this condition. That is because this diagnosis was first made official just in May 2013 with the publication of the Diagnostic and Statistical Manual Fifth Edition (DSM-5). This is the guidebook that psychologists, counselors, and doctors use to determine whether someone has a mental health condition.

With that guide, psychologists use the following criteria for the symptoms of Binge Eating Disorder: 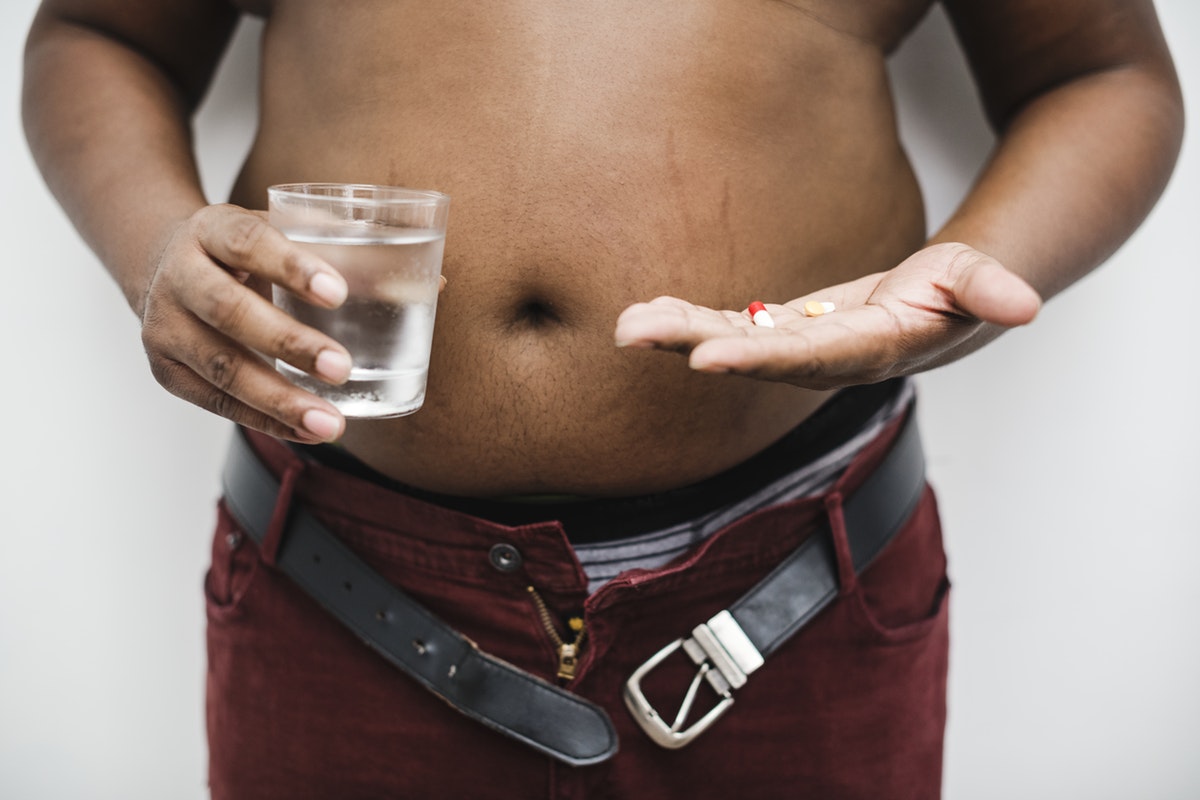 The primary feature of Binge Eating Disorder is the behavior of eating a great deal of food, in a short amount of time, even when not feeling physically hungry. Often, when people with Binge Eating Disorder are engaged in a binge, they may feel completely out of control with their behavior. They may even feel compelled to keep eating even after becoming uncomfortably full.

Overall, Binge Eating Disorder can be caused by a combination of biological, psychological, and Sociocultural Factors. Some with this disorder have an imbalance in their brain chemistry, which may require medications to correct. Others have a broader mental health condition that is influencing their eating behaviors. Still, others have experienced some social and or cultural event(s) that prompt the binge eating. Often, it is a combination of all these components that work together as the cause.

Many people with Binge Eating Disorder initially adopt these behaviors because they find food comforting in some way. While engaged in a binge, they may initially feel a sense of calm and stress reduction. Sometimes, people will even plan for a binge, knowing that they want the pleasant feelings it brings. However, the binge and whatever rewards they get from it are only seemingly helpful in the short-term. In the long-run, people tend to regret their binge behaviors. 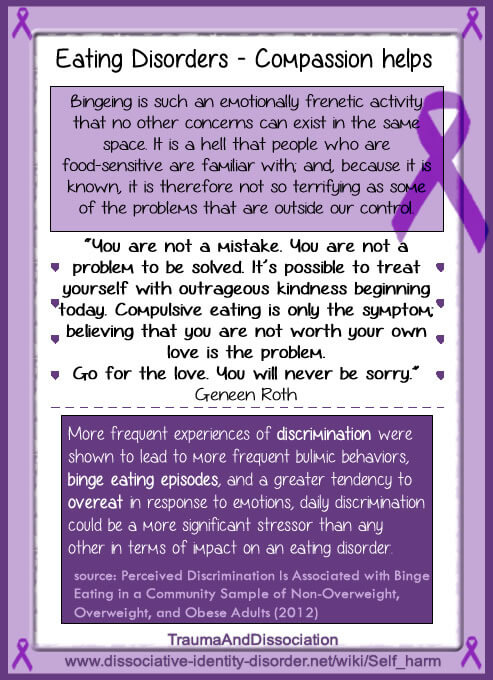 Both women and men of any age can be affected by binge eating disorder. Approximately 3.5% of women in the US have this disorder, while 2% of men do. During adolescence, Binge Eating Disorder tends to affect more women than men. More men struggle with these behaviors starting in midlife. No matter what age you are when these symptoms start, it is important to get connected to help.

People with binge eating symptoms can also be affected by symptoms of Anxiety and Depression. The likelihood of this increases and the mental health symptoms tend to be even more severe if the individual also has problems with their weight and even obesity. Many people with anxiety develop disordered eating behaviors as a way to cope. The opposite can also be true, in that someone with Binge Eating Disorder may then develop anxiety, in part because of having the disorder.

Obesity is a serious disorder with many health consequences such as high blood pressure. Living in a state of obesity can lead to premature death. Many that binge eat try to combat any weight gain with dieting. However, because of the drive to binge, the diet often does not last or is at least not very helpful. Any weight fluctuations from binging and dieting can also be hard on the body and unhealthy.

If you are concerned about someone else in your life that you suspect may have Binge Eating Disorder, you may notice some warning signs. People with Binge Eating Disorder may try to hide some of their behaviors, so it can be hard to tell for sure what they may be struggling with. If they are hiding their eating, that alone is a big sign. Evidence someone is hiding their eating may occur in the form of empty food containers and trash turning up in unusual places such as their bedroom and car. They may act secretive and even evasive towards answering questions about their eating habits.

If someone is engaging in unusual eating behaviors, it does not necessarily mean that they have Binge Eating Disorder. However, when you are concerned about someone in your life, it is better to talk to them and discuss the behaviors you have noticed. Usually, it is helpful to approach the person at a time when the two of you can have a calm, quiet conversation away from other people. Sometimes just describing what you have noticed and letting them know you are available to talk, can help them feel more comfortable and they may open up to you. Then, you can figure out the next steps together. 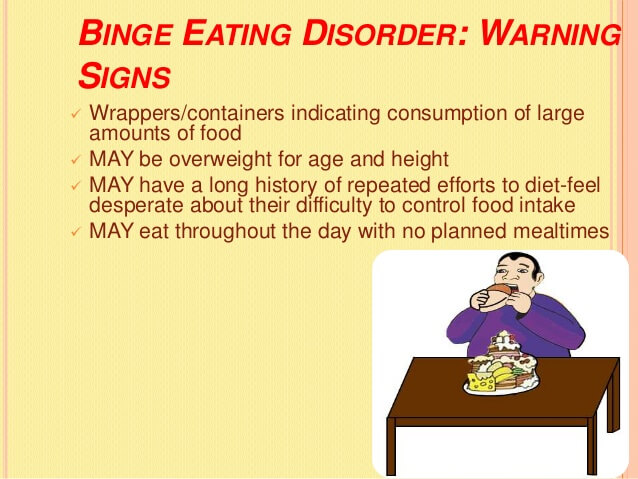 Many people overeat from time to time, but if you often overeat, sometimes overeat extreme amounts of food, and sometimes feel out of control with your eating, then these are signs you should be concerned about. You can seek help for Binge Eating Disorder from a mental health provider.

Binge Eating Disorder can be a complex disorder to address. Often people with the disorder do also have other mental health problems that need to be treated simultaneously. In addition to symptoms of Anxiety or Depression, people with Binge Eating Disorder may also have problems with self-esteem and confidence. They could have experienced other traumas or abuses in their life that prompted their unhealthy relationship with food. For these reasons, it is good to get professional help.

Seek out therapy services. A therapist can help uncover the reasons for your behavior and help you learn new ways of coping with any problems you may have. They can also help you learn new ways of interacting with food. People with Binge Eating Disorder often benefit also from working with a dietician or nutritionist to develop healthier eating patterns and a therapist may connect you to that resource. Overall, they will work with you to set goals and then help you to work towards the goals.

Binge Eating Disorder: The Symptoms And Why It’s Harmful