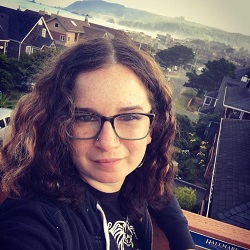 Sarah Fader is the CEO and Founder of Eliezer Tristan Publishing Company, where she is dedicated to sharing the words of authors who endure and survive trauma and mental illness. She is also the CEO and Founder of Stigma Fighters, a non-profit organization that encourages individuals with mental illness to share their personal stories. She has been featured in The New York Times, The Washington Post, The Atlantic, Quartz, ADAA, Psychology Today, The Huffington Post, HuffPost Live, GoodMenProject, TheMighty, ravishly, YourTango, and Good Day New York. Sarah is a native New Yorker who enjoys naps, talking to strangers, and caring for her two small humans and two average-sized cats. Like six million other Americans, Sarah lives with Bipolar type II, OCD ADHD, and PTSD. Through Stigma Fighters, Sarah hopes to change the world, one mental health stigma at a time.

Sarah has accurately described herself as a mental health advocate, writer (with published books available on Amazon), and more. To link up with Sarah, you can find her on LinkedIn, Twitter, or FaceBook.