Advice Home > Anxiety > How Anxiety Tattoos Can Change Your Life

How Anxiety Tattoos Can Change Your Life

When it comes to anxiety, people cope with it in different ways. Some will take to social media, blog about their experiences, and make sure others are listening. Some people have their therapy system to help combat anxiety which can be done by a professional or self-taught. Some use medication, and it's okay to take medicine that helps reduce your risk of having an episode. But there's a new trend that's renovating how some handle anxiety, and that's through tattoos. 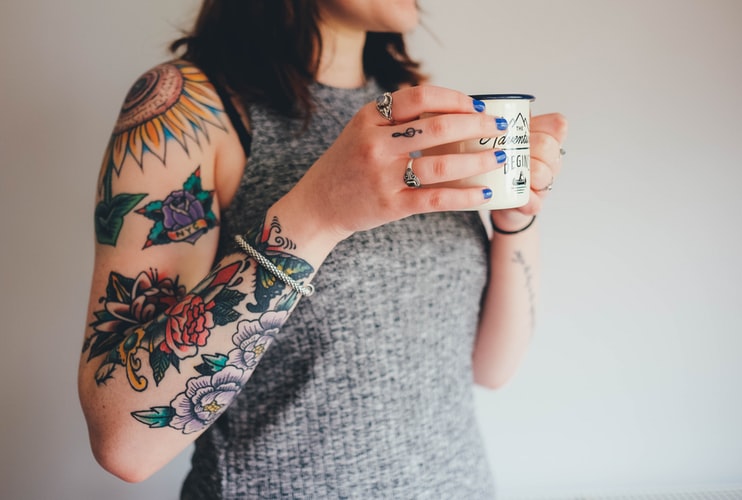 Wondering How Anxiety Tattoos Can Change Your Life?
Find Out How. Speak With A Board-Certified Mental Health Professional Online Today.

Tattoos are versatile and up to the owner. Some people get tattoos because they look interesting and make them stand out. Others may get a tattoo of something they like. There are some who think tattoos must have a deep meaning, and they may never get a tattoo because they can't think of anything sacred enough to put on their body.

The point is there's no wrong way to get a tattoo. One reason why people may get a tattoo is for therapeutic reasons. These reasons vary.

Some people get a tattoo for a lost loved one. You've probably seen people who will get tattoos for their deceased relatives or friends. They may have their birth and death date, a portrait of them, or maybe something a little more subtle. For example, if your friend liked a certain TV show, you may get a tattoo of a character on there.

Going through a traumatic event can be tough. From a bad breakup to financial difficulties, times can be tough. Getting a tattoo to symbolize the struggle can be a therapeutic way to know you've moved on from that trouble, and as a way for you to say, "This is now, that was then."

If someone has survived cancer or any other deadly disease or situation, tattoos make good reminders of what you've gone through. There have been women who have tattooed their chest after a mastectomy to remind them of surviving breast cancer. It's a way to tell yourself that you're a strong person, and what tries to kill you becomes a trophy on your body, never to harm you again.

People may receive a tattoo regarding a mental disorder. Having a tattoo that reminds you of the struggles you're going through on the inside can be quite relieving. For one, it shows the world what's going on inside, and the tattoo helps to invite people who may be struggling with the same mental condition. Some use symbols, like the puzzle piece for autism, while others may try to be subtle. Anxiety tattoos have become a good way to relieve sufferers. 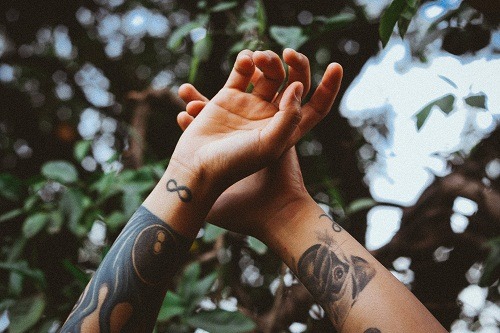 Those who aren't in the tattoo scene may be confused. For some, having a reminder that your friend died or you survived a traumatic experience on your body, that you'll have to see every day, seems like it would be quite triggering. Some may say you should move on and forget the past.

For those who have tattoo therapy, they don't see it that way. Tattoos are a way to close a part of your life. Think of your memories as an art gallery. You're proudly displaying your past in a way that respects it and tells you not to forget it, but it brings forth a historical feeling of closure.

Those who get tattoos may find relief from the pain. As the tattoo is etched on them, they're thinking of what it symbolizes. They're struggling one more time, and it's a way for them to move on to the next stage.

What Does the Science Say?

There are plenty of treatments and therapies that people swear by. However, many end up being placebos at best and dangerous at worst. Is tattoo therapy scientifically backed?

Plenty of psychologists are seeing the benefits of tattoo therapy. It certainly is not a one-size-fits-all way of coping. There will be people who will benefit more from doing something else, but it's becoming more acceptable as a form of grieving.

When it comes to anxiety, what kinds of tattoos do most people like to get? If you look up anxiety tattoos online, you'll see tattoos that are encouraging and may have messages. It symbolizes the fact that people who have anxiety tattoos are happy people who just have their moments. Some find therapy in looking at their tattoos and reminding themselves that everything will be alright

Below are a few examples of anxiety tattoos.

Serotonin is a chemical in the brain that makes people feel happy. Of course, the brain is a little more complex than that, but the spirit of the idea makes people tattoo the molecule on themselves. It's a little reminder that your moods are just chemicals in the brain, and it is a way to encourage happiness. 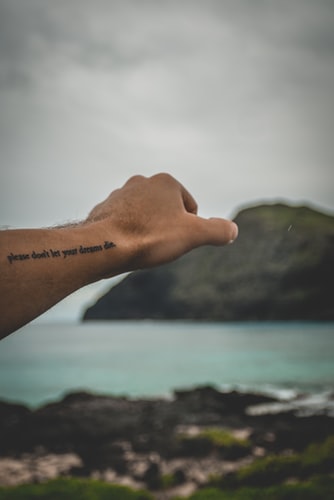 Wondering How Anxiety Tattoos Can Change Your Life?
Find Out How. Speak With A Board-Certified Mental Health Professional Online Today.

Some also see a message stuck in your body to be more powerful than saying the same message aloud or reading it.

Others may want a tattoo that brings forth a feeling of tranquility, like a waterfall, a beautiful butterfly, or anything else that's soothing or cute. Looking at your body and reminding yourself that you're going to be all right is a good way to make yourself feel better.

There are some who put words on their body, but they mean something else when viewed from a different angle. For example, you can get a tattoo that says, "I'm fine," when viewed from your average person, but from your angle, it's upside down, and the letters read "save me." It's a way to symbolize the fact that just because someone looks okay, they may not be. Some have battles on the inside that they must conquer, and everyone should realize that.

Think of something that makes you happy and makes you remember better times. It can be a TV show, a place, or anything that has ever made you feel bliss. Getting a tattoo of that and travelling back in time whenever you feel an episode coming can be soothing. It won't be a substitute for going there, but the memories can help relieve the pain you're feeling.

If you're thinking about getting a tattoo for yourself, it can be whatever you feel like. If you want to get a tattoo you found online; there's no shame in that. If you want to make something new and important to yourself, that's good too. Tattoos are flexible like that, and there isn't one anxiety tattoo that works for everyone. Some like subtlety, others like the message spelled out.

Are Tattoos Right for Me?

If you've never gotten a tattoo in general, and are thinking about it, why not do some research? Figure out the cost of a tattoo in your area, talk to some people who have them, and see a specialist. If you're scared of the pain, look up some pain charts. There are some areas of your body where it will hurt a lot less.

If you don't like the idea of it being permanent, you can always investigate temporary tattoos as well. Tattoos like henna are good for experimenting, and to see if tattoos are right for you or not.

One Of Many Tools

Tattoo therapy can be a powerful tool in fighting anxiety, but for many, tattoos are one of several tools. This can include the tools mentioned in the introductions, as well as lifestyle changes. A combination of self-help, professional therapy, and medication are great tools in fighting the battle of anxiety.

There are online therapists out there who are affordable and can help you on your journey to conquer anxiety. Tattoos may be a big help, but there are many other options to battle mental illness out there. Below are a couple reviews, from people experiencing similar issues.

"Norma is attentive, thoughtful, and clearly cares about helping you. I was dealing with a lot of self-doubt and deep anxiety over bad life events and she helped me get back on my feet. She had deep insights into my experiences and helped me see them in new and helpful ways. I feel so much better now because of that."

"Kelly has been amazing. From our first few interactions, she put me at ease, told me exactly what to expect, and started building a rapport. She is easy to talk to and has helped my anxiety significantly decrease in just a few short weeks."

Tattoo therapy is growing in popularity because it has proven its effectiveness. There are many other effective tools to help you move forward to a fulfilling life, free from anxiety holding you back-take the first step today.

Coping With Adjustment Disorder With Anxiety