Advice Home > Depression > Am I Depressed Or Is It Just A Phase?

Am I Depressed Or Is It Just A Phase? 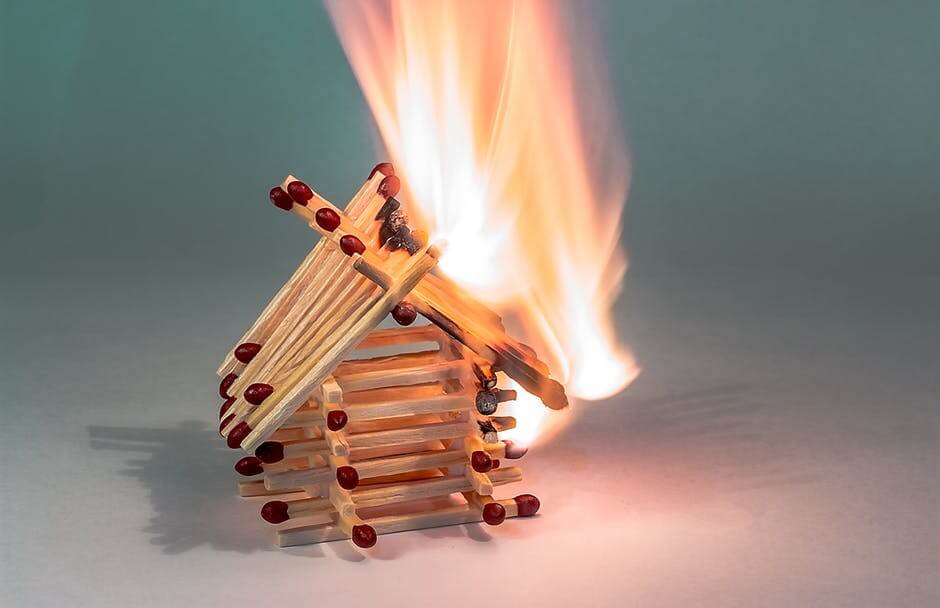 Depression Can Feel Isolating. But You Don't Have to Cope With it Alone.
An Online Counselor Can Help You Cope With Depression.
Source: pexels.com

Teens are moody, hormonal, with fluctuating emotions that make it difficult for them, their parents, and even healthcare professionals to determine whether they are depressed or just being a teen. This is troubling to both the parents and the teens, as dismissing signs and symptoms as just a phase could be dangerous. According to recent reports from the CDC (Center for Disease Control), suicide rates overall are highest among youths ages 10-24, with the largest group being boys ("Youth Suicide | Suicide Prevention | Violence Prevention | Injury Center | CDC," 2015.); however, a more recent report indicates that suicide is on the rise in teenage girls ("Suicide Rates Climb In U.S., Especially Among Adolescent Girls," 2016).

There are the usual factors at play when it comes to teen depression and suicide. Family life and parental relationships are most critical in a teen's life. Academic, extracurricular, and social stressors are enough to make any teen feel stressed, and even depressed, but when the home is not a safe landing place for teens, they find they have no place to go. Recent studies have found that many teens use social media as means of crying out (Does "Facebook depression?" in teens exist? 2013). However, unless a concerned adult sees and responds to this cry for help, it may only be met with thumbs ups or the sad face icon. In fact, the ability to reach out socially for some teens is enough, and for some, Facebook depression groups offer a means of support they may not otherwise have (Lerman et al., 2016).

So, have you answered the Am I Depressed Question Yet?

Research suggests that the ability to externalize feelings helps reduce factors leading to depression, such as stress (Rodriguez, Donenberg, Emerson, Wilson, & Javdani, 2015). If teens cannot talk to their parents or their teachers, then social media becomes a useful tool. The ability to reach out through social media is a means for teens to share their feelings. Within this medium, they can vent, and even receive feedback and support from teens that may or may not be in their immediate social circle. Many teens do not feel comfortable discussing their feelings with their parents; in fact, the underlying cause of the depression in teens may be their relationship with their parents (Neighbors, Forehand, & McVicar, 1993).

Parents may or may not realize the role they play in their child's mental health. The words and the manner of expressing disappointment and anger can lead to teen depression (Link found between parental verbal discipline, teen depression, 2013). There is a causal link between parenting, parent-child relationship and teen stress and depression. Parenting is not easy, and sometimes being the child of a parent who lacks good coping skills is more difficult; meaning the teen must find some other means of dealing with depression (Neighbors et al., 1993).

While there are positives to teens using social media as an outlet for their emotions, they also risk the dangers of exposing themselves to cyberbullying. In recent years cyberbullying has become increasingly prevalent among teens (Knopf, 2015), and as a result, there have been cases where teens have committed suicide due to an inability to cope with the cyberbullying as well as the aftermath and reactions to the online bullying, offline at school, and home (Knopf).

Some teens may turn to substance abuse to self-medicate against feelings of anxiety and depression, possibly leading to addiction and legal problems (Risk factors of anxiety, depression in teens, 2008). Teens who are active in curricular as well as extracurricular activities may experience depression, but have more supports in place to help in combatting it (Rodriguez et al., 2015). With the rising numbers of teens committing suicide each year, studies indicate that the signs were there, but no one saw them or heard the cries for help ("Youth Suicide|Suicide Prevention|Violence Prevention|Injury Center|CDC," 2015). 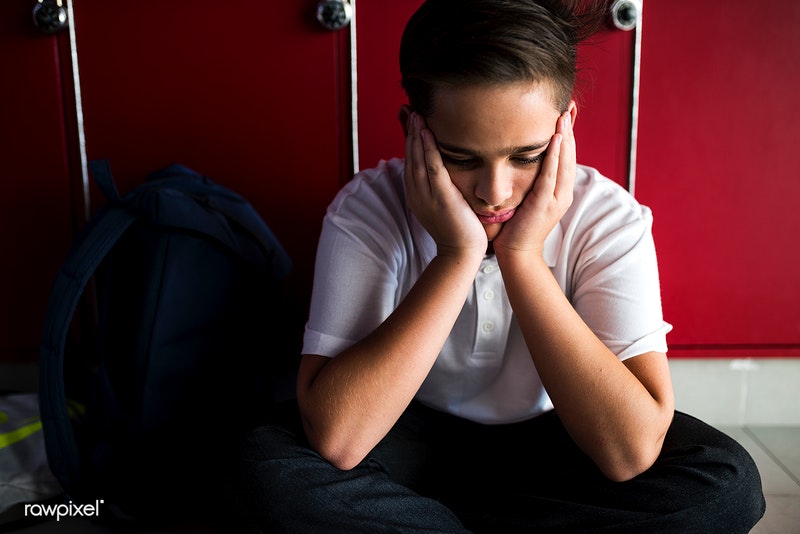 When a student commits suicide, it shakes up the family and the entire community, and it especially affects the school where the student attended. Often, because teens are moody, hormonal, and not always communicative, there is no recognition of what was happening until there is an empty seat in a classroom. School-based interventions are forming in many schools across the United States in response to this need ("School-based safety interventions. Identifying children and teens at risk for depression or violence," 2008). In these programs, counselors, teachers, and peer mediators are trained to identify and intervene when there are signs of child and teen depression.

Some of the signs that a teen suffers from depression include, but are not limited to:

The difficult part is that teens may show any one of these signs due to their moodiness, and hormonal mood swings. Parents can attest to the fact that restricting social interaction with friends as a punishment for a bad grade can send some teens into a rage, tears, and sadness. However, these outbursts tend to not last very long. Healthy teens will typically apologize for any outbursts and bounce right back. Alternately, for some this type of behavior occurs frequently and is a sign of deeper issues ("Parent's Guide to Teen Depression," n.d.).

Some teens are more resilient than others and seem to bounce back, even after major setbacks like the loss of a parent or other loved one (Gerber et al., 2013). According to Dumont and Provost (1999), resilient teens seem to have built-in radar that appears to guide them toward social supports, activities, and more positive interactions with others so that when stressful events arise, they are more adept at coping. As school is the largest part of life for children between the ages of 5-18, it is important to have these social supports in place, as teens do not always seek help due to parental conflict or fear of being mocked by their peer group, they will try many avenues toward feeling better, some more positive than others before verbally asking for help. (Neighbors et al., 1993; Wisdom & Barker, 2006).

While it may seem frightening to parents, teachers, and school counselors that teens often walk around with feelings of hopelessness and even thoughts of suicide, there are those teens who seek avenues for help. Teens who have adopted good coping skills prefer to work through their issues, and often capable of coming up with their solutions (Wisdom & Barker, 2006).

Teens are overall in touch with what is available to them on social media, and since many are online for much of their day, some practitioners and other groups have generated resources and information geared towards teens. Sometimes teens may have concerns over their feelings, thinking that they are abnormal or may even fear to commit suicide. While responding to an online quiz is not a replacement for speaking to a professional, participating in such an activity like the Teen Depression Quiz ("Achieve Solutions | Teen Depression Quiz," n.d.) can at least help provide some insights to the teen that can bring a level of comfort or awareness.

Ryan (2006) recommends a workbook created by Copland and Copans in 2002 to help teens to navigate their way through depression. Ryan states that teens will go in search for their answers and many times before seeking the help of an adult. While this workbook is available through booksellers, there are others such as Beyond the Blues(Schab, 2008) available for download on Kindle. 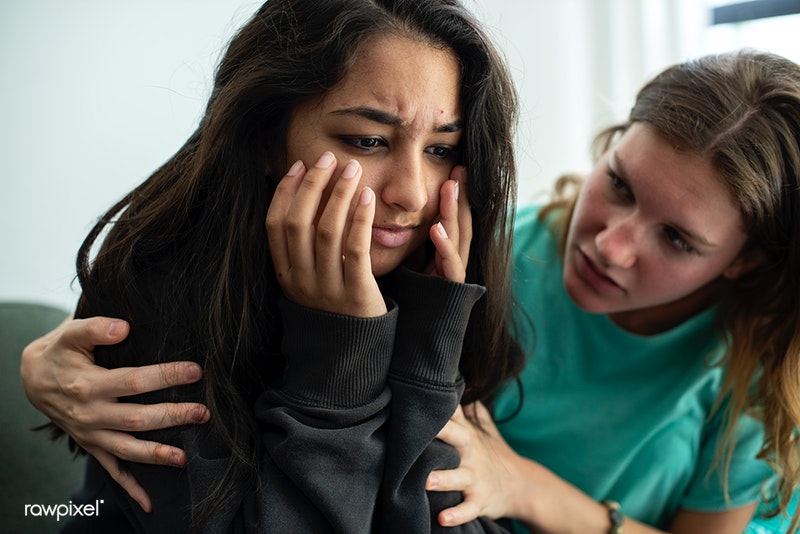 Depression Can Feel Isolating. But You Don't Have to Cope With it Alone.
An Online Counselor Can Help You Cope With Depression.

When a teen is actively seeking help, there is hope for that teen and those who care for him or her. It is when a depressed teen is not seeking help, not crying out through any means available that the situation has reached its direst state. While parents should not spy on their children's social media sites, they should at least be aware of what their children have any of their usernames. The most devastating thing for a parent of a child who has committed suicide to find is that their anguish and pain was posted all over social media, and they never knew.

Some Of The Reasons You're Wondering If You're Dealing With Depression

Social media, curricular and extra-curricular activities play a large role in the lives of teens (Guest & McRee, 2009), teens live within the context of these activities and most of their anxiety and stress are derived from them. While social media and friends sometimes seem to be more of a priority to teens than their relationships with their parents, this is not the case; they merely provide a buffer (Dumont & Provost, 1999). Teens need their parents to be in tuned to their world in a non-intrusive and non-threatening way.

Being a teen is frightening sometimes. Some teens have extremely good coping skills, others are resilient, and then some teens are fragile or seem broken beyond repair. Teachers, peers, and parents are the most immediate sources of help in a teen's world. There are times when a teen feels the need to reach beyond those closest, and seek help from those thought to be more objective. For the teen that has used social media and other Internet sources for help, seeking support through an online counseling source might be an alternative. Online counseling not only offers an outlet for expressing emotions, venting, or discussing issues regarding parents and school, but the opportunity for a licensed professional to give feedback in a safe, secure, and confidential environment.

Dumont, M., & Provost, M. A. (1999). Resilience in adolescents: Protective role of social support, coping strategies, self-esteem, and social activities on experience of stress and depression. Journal of Youth and Adolescence, 28(3), 343-363.

Chronic Depression: Why You’ve Felt Blue For So Long