Why Are The Signs Of Depression In Men Different Than In Women?

While everyone may experience the issues mentioned in this article, please note that as part of our initiative responding to the APA Guidelines for Psychological Practice with Boys and Men (2018), these articles will focus on how these topics affect men and boys. We use “men” to refer to people who identify as men.

Gender alone does not determine whether or not someone can experience depression, as everyone can face depression or mental illness.

Signs of depression, however, may vary drastically specifically between men and women. Men are more likely to openly display anger and aggression rather than sadness, and family members and friends may not realize that this can be a symptom of depression.

Depression In Men Versus Women

Depression can be seen as two-pronged: there are signs and symptoms, and then there are coping mechanisms and other depression-influenced behaviors.

Men and women often share these common symptoms of depression:

On the other hand, men may experience certain problems or engage in certain problematic behaviors that could indicate depression but aren’t typically recognized as such:

Depression can be particularly dangerous with men because many of us don’t want to recognize that we may need help, largely because traditional masculinity ideology encourages us to limit the expression of our emotions, particularly those linked to depression. This likely factors into why women are statistically twice as likely as men to be diagnosed with depression.

Now, let’s look more closely at some of the most common depression symptoms in men. 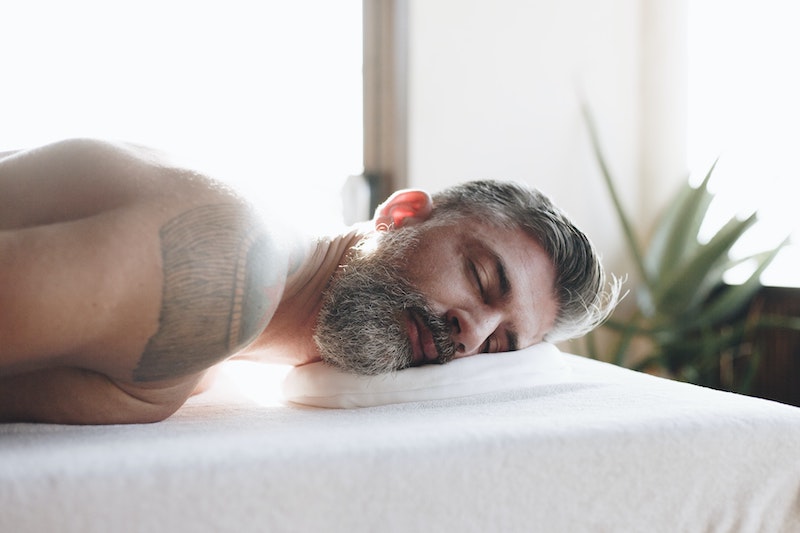 We may not realize it, but overindulgence in escapist behaviors often signals a desire to escape from reality and our depression.

These behaviors can vary widely but involve an unhealthy or unsustainable amount of time and money. Some escapist behaviors common among depressed men include pornography, video games, working out, gambling and sports betting, watching sports, and binge-watching shows or films.

Severe stress can indicate depression and wreaks havoc not only mentally but physically too. Men struggling with stress and depression might experience headaches, gastrointestinal issues, and other ailments. Other physical manifestations of depression in men may include sudden or significant weight loss or gain, fatigue, and a racing heartbeat.

Men may turn to alcohol or other drugs to cope with their depressive symptoms. Curiously, this is less likely to be viewed as a sign of depression in men than women.

Unfortunately, displays of anger and irritability are more socially accepted among men than women, meaning that people (including medical professionals) may fail to recognize such behaviors as indicative of depression in men.

Along with substance use disorder, depressed men are generally more likely to engage in risky behaviors than depressed women, including dangerous driving, binge drinking, unprotected sex, and gambling, as well as other risky financial behaviors.

Men often use these behaviors as a shield to mask or distract from their depression, and it can thus be more difficult to view them as depression-specific symptoms. Wondering If You Might Be Struggling With Depression?
We Can Help. Get Matched With A Licensed Counselor.

There are several ways to fight depression—and you can find a substantial list below in the FAQ section—but perhaps the two most powerful ways are consulting with a professional and getting physical exercise.

When you meet with a professional, you have your own dedicated space to strengthen your health and ensure your needs are getting met.

Often, men discuss needing to be strong or stoic for their partners, families, etc., and being unable to voice their needs because doing so would take up space. That’s why setting up time and a dedicated space for yourself to take control of your health is key.

It can take a lot of strength to step up and consult with a professional; if you’re not ready yet, getting physical exercise can help.

Regular exercise helps boost the feel-good chemicals endorphins and serotonin, which are the brain chemicals commonly targeted by several types of antidepressant drugs.

Many men report a significant improvement in their health after meeting with the professionals at BetterHelp.

“Utterly phenomenal, without this man, I would be in a significantly worse place; I was able to face my fears, get the girl, all while overcoming depression and anxiety issues. Not a cure-all pill, required a lot of work, but his capabilities, friendliness, and approachability can’t be beaten!”

“Jonathan is outstanding. When I first started with BH, I was honestly a little skeptical at how effecting counseling through my iPhone would be, especially at such a great value. That skepticism immediately vanished when I first connected with Jonathan; the man is World Class! He has offered me guidance and coaching that has expanded into multiple aspects of my life, enabling me to grow as a person tremendously. I can not say enough great things about BH and Jonathan Meza!!”

We hope this overview of depression symptoms in men and how they differ from women has been useful.

Why do guys get depressed?

Which of these is a male-specific symptom of depression?

The five symptoms of depression highlighted in this article, except escapist behaviors and health problems, are more likely to be found in depressed men than women.

Is depression more common in males or females?

Depression is more common in women, but this may be because women are more likely to acknowledge their depression symptoms and reach out for help.

How can I test my mental health?

There are useful resources online that allow you to test your mental health quickly and easily. For example, you can take a Mental Health Test from Mental Health America. It’s important to note that these tests are not substitutes for professionals.

How can I improve myself mentally?

There are many ways to improve your mental health. In general, it’s about keeping balance and prioritizing your happiness and comfort. Try the following approaches to start:

Previous Article
Identifying The Physical Symptoms Of Depression - And What To Do About Them
Next Article
Postpartum Depression Statistics: Knowing The Numbers
You Don’t Have To Face Depression Alone. Our Experienced Counselors Can Help.
Get Help & Support With Depression Today
The information on this page is not intended to be a substitution for diagnosis, treatment, or informed professional advice. You should not take any action or avoid taking any action without consulting with a qualified mental health professional. For more information, please read our terms of use.