Body dysmorphic disorder, also sometimes shortened to body dysmorphia or BDD, is a condition that causes people to obsess over how they look and have a negative perception of their self-image. It can have various causes and risk factors, and importantly, it can be extremely distressing and time-consuming. This article will define body dysmorphia, discuss its signs and symptoms, and how it is diagnosed, as well as go over what treatment methods are available. 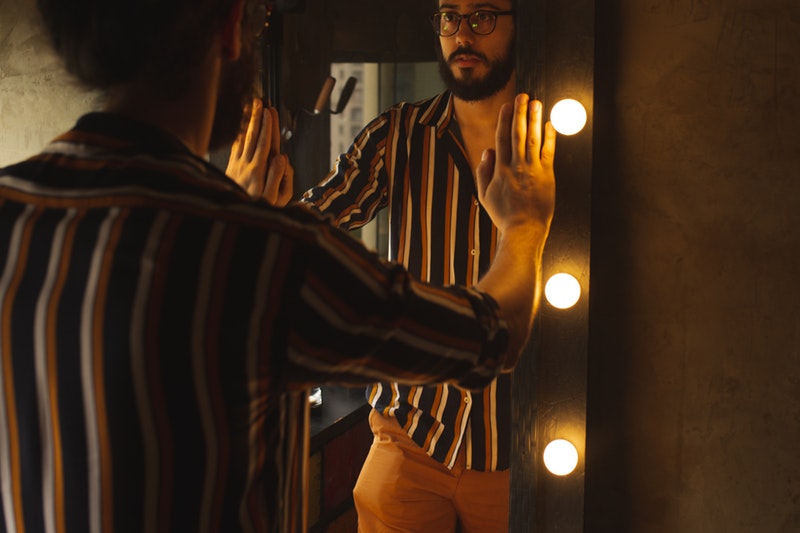 I Think I Have Body Dysmorphic Disorder, What Do I Do?
Change Is Possible - Learn Self-Love With A Licensed Therapist Today.
This website is owned and operated by BetterHelp, who receives all fees associated with the platform.

This condition typically appears in early adolescence, but it often takes more than a decade for people to recognize that they have a severe mental condition and seek treatment. Therefore, people with BDD can suffer and be functionally impaired for many years. [1]

The body dysmorphic disorder DSM-5 criteria are listed as follows: [2]

A. Preoccupation with one or more perceived defects or flaws in physical appearance that are not observable or appear slight to others.

B. At some point during the course of the disorder, the individual has performed repetitive behaviors (e.g., mirror checking, excessive grooming, skin picking, reassurance seeking) or mental acts (e.g., comparing his or her appearance with that of others) in response to the appearance concerns.

C. The preoccupation causes clinically significant distress or impairment in social, occupational, or other areas of functioning.

D. The appearance preoccupation is not better explained by concerns with body fat or weight in an individual whose symptoms meet diagnostic criteria for an eating disorder.

Additionally, there are a couple of areas that may need specification. The first one pertains to muscle dysmorphia, a form of body dysmorphic disorder, and it asks if the individual is preoccupied with being too small or certain areas of the body.

The second one is more general, and it asks for insight regarding the person's beliefs about the condition, with three possible choices: [2]

This last section is particularly important in diagnoses because it can determine what course of treatment is required. However, unfortunately, many doctors are untrained to recognize the signs of body dysmorphic disorder, and it can often be misdiagnosed as depression or OCD. [1]

Therefore, recognizing the signs in yourself or someone you associate with can make the difference in receiving the right treatment and possibly saving a life.

Although some of the symptoms of BDD were explained through the DSM-5 criteria in the previous section, there are more signs to look out for. In addition to the hallmark symptoms such as obsessive mirror-checking, grooming habits, and comparing themselves to others, some people with body dysmorphia may: [3] 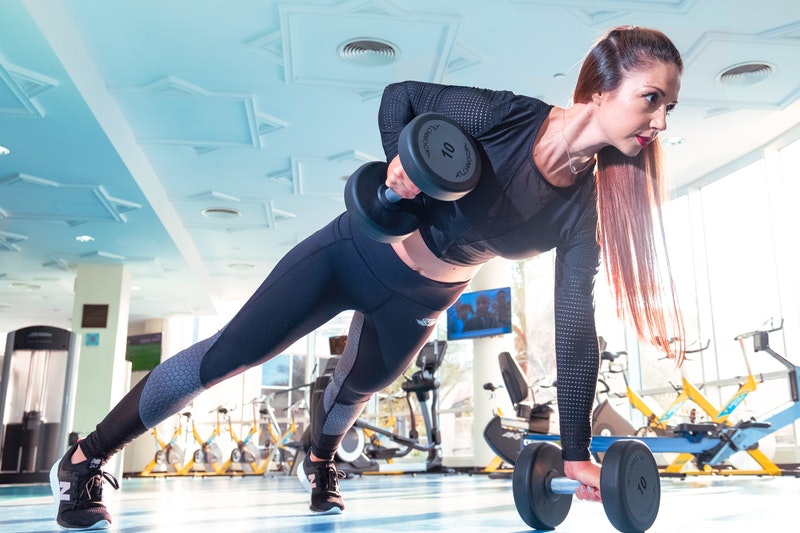 Friends, family, and peers might also notice drastic weight changes. Although they are differentiated from one another, BDD often coexists with eating disorders like anorexia nervosa and bulimia. Someone with body dysmorphia and anorexia might believe that they are overweight; in reality, they are extremely underweight because of their reduced food intake. [4]

Because of this, it is also possible for the person to appear malnourished and ill, but in an individual's mind who has BDD, there is still work to be done.

On the opposite end of the spectrum, those who feel like they are too small will be preoccupied with eating enough food and spending time in the gym and lifting weights, as is often the case with muscle dysmorphia, a subtype of BDD that often affects males.

These obsessions can also cause other psychiatric issues such as depression, anxiety, substance abuse, and even suicidality. Statistics regarding suicide and BDD are quite high, and studies show that approximately 78 percent of those with the condition have had suicidal ideation, between 45 to 71 percent of them attributed it directly to BDD, and 24 to 28 percent have attempted to take their own lives. [1]

As mentioned before, BDD is heavily misdiagnosed and is frequently identified as depression or OCD by non-mental health professionals.

Therefore, not only it is up to these doctors to be able to start recognizing the signs of BDD, but friends, family, peers, teachers should as well so that they can refer them to the right medical professional.

Patients with BDD often do not recognize that they have a serious psychiatric condition and do not seek mental help. Unfortunately, it is very common for people struggling with body dysmorphia to find cosmetic solutions to their problems, such as from a dermatologist or plastic surgeon, instead of addressing the root cause of the disorder. [1]

In some cases, doctors in these professions may recognize signs of BDD in their patients and recommend that they speak with a psychiatrist.

Nonetheless, because BDD is easily misdiagnosed, it is recommended that medical doctors ask their patient questions if they suspect there is any possibility of the condition being present. Some questions that should be asked are: [1]

Additionally, cosmetic doctors, such as a plastic surgeon, can ask specific questions that might indicate BDD such as [1]

Sometimes patients might have unreasonable expectations, and it is possible for them to continue to get operations despite there being no real issues. Additionally, some requests may seem unusual to the doctor, and they can indicate that their patient has spent an excessive amount of time in front of a mirror, possibly at different angles.

Although a psychiatrist or other mental health professional is ideal for identifying and diagnosing body dysmorphic disorder, these are steps that can be done by general practitioners and other doctors to help improve success rates.

It is also important for doctors to not dismiss their concerns as being vain. Due to the highly sensitive nature of BDD, a clinician's attitude is very important when diagnosing this condition, and they should strive to be thoughtful, emphatic, and always take his or her patient's word seriously. [1]

Doing so can help the patient open up more, which can lead to a proper, formal diagnosis, and putting them on a treatment plan that works.

Treating body dysmorphia can often require a combination of medication or therapy, and many people have seen significant improvements using both.

Currently, the medications of choice for treating body dysmorphic symptoms are Selective Serotonin Reuptake Inhibitors (SSRI), a class of antidepressant drugs. [4] These are a versatile prescription drug that not only can treat depressive symptoms, but also obsessive-compulsive traits as well. 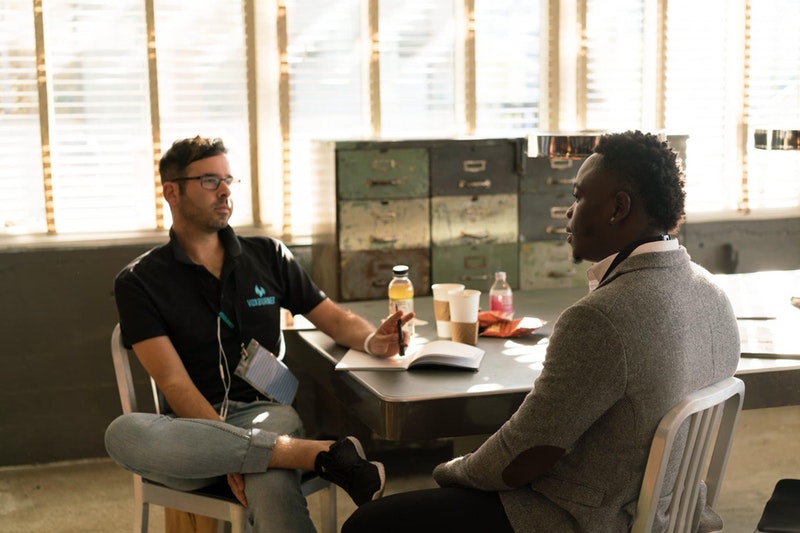 I Think I Have Body Dysmorphic Disorder, What Do I Do?
Change Is Possible - Learn Self-Love With A Licensed Therapist Today.

The most popular form of psychotherapy for BDD is Cognitive Behavioral Therapy (CBT) because it can address the thoughts and change the way people think about themselves. This typically involves identifying the patient's maladaptive thoughts and offering alternative and more productive ways of thinking about their body. [5]

CBT has been used to successfully treat a variety of mental conditions, not just body dysmorphic disorder, and at BetterHelp, you can find licensed and professional therapists who are experienced with CBT and its strategies.

Education is also important, and a therapist treating BDD should help the client be able to distinguish between body image and appearance and also discuss why the condition can occur in the first place [5]. Doing this can help retrain and restructure the way the individual thinks about themselves.

Lastly, relapse prevention will be necessary to prevent patients from falling back into old habits and mindsets. Typically, this will involve reinforcing the skills that they've learned and can involve planning for the future so that they can continue to manage their symptoms, have improved self-esteem, and ultimately, live a happier, more productive life.

Coping With Body Image Issues In The Modern World Coping With Body Image Issues In The Modern World Why Taking a Body Dysmorphia Test Can Help You Start Getting the Help You Need What Everyone Should Know About Social Media And Body Image The Link Between Body Image And The Media And Its Damaging Effects Learning To Love Your Physical Appearance What Is The Best Type Of Body Dysmorphic Disorder Treatment For Me?
The information on this page is not intended to be a substitution for diagnosis, treatment, or informed professional advice. You should not take any action or avoid taking any action without consulting with a qualified mental health professional. For more information, please read our terms of use.
Your session is about to expire!