When Does PTSD Go Away? Exploring Its Long-Term Outlook

Could Comorbid Depression Be Holding You Back?
Find Out More By Talking To A Therapist

PTSD symptoms affect different people in different ways depending on who they are, what traumatic events they've been through, and how they are approaching treatment. The good news is that, with treatment from mental health professionals, most people with PTSD do learn to manage their symptoms, continue the journey of healing trauma, and live a happy life. For others, PTSD does actually go away, and the diagnosed overcome PTSD and their traumatic events. Unfortunately, there's no easy answer to when. The important thing is to remember that professional treatment takes time and needs to be allowed to progress at its own natural pace. Being impatient won't speed up the healing process of experienced trauma. It may actually slow it down by introducing new and unnecessary anxieties.

Here we'll talk about what PTSD is, how it's treated, and how long you can expect it to last.

PTSD is short for Post Traumatic Stress Disorder. Women and men develop PTSD through a single or multiple traumatic events. Patients of a PTSD diagnosis is done by a licensed therapist or medical professional. Patients with PTSD may experience feelings of sadness, hopelessness, apathy, and other negative thoughts which can also seem like the same emotions as people with depression and other forms of mental illness. They also may experience intense feelings of intense fear, anger, or distress that may or may not be triggered by certain events, as is the case with anxiety. Physical sensations, such as difficulty with sleep or a stress response with increased blood pressure or adrenaline, are also common.

Post-traumatic stress disorder is a chronic and severe anxiety disorder. The onset of PTSD is normally triggered by the sudden (and unexpected) exposure to a traumatic life event. Examples of sudden and unexpected events that can trigger the trauma of PTSD are natural disasters, wars, sexual abuse, emotional abuse, death of a loved one, or witnessing someone else being abused. Not everyone who experiences a severe event like that will experience the lingering effects of the trauma that happened. According to the American Psychiatric Association, having PTSD involves having intense disturbing thoughts and feelings related to their experience that lasts long after the traumatic event has ended.

What this means is that someone experiencing PTSD may have the real symptoms of the physical and emotional effects of a traumatic event as if they're still happening. PTSD sufferers experience these ongoing episodes in the form or nightmares, flashbacks, dissociative episodes, and extreme anxiety. When making a comparison between acute stress disorder and PTSD - the main difference between these two anxiety related disorders is that post-traumatic stress disorder is a chronic mental health condition that can last a lifetime. Acute stress disorder is normally limited to one episode and doesn't have any lasting or chronic effects.

Unlike anxiety and depression, however, Post Traumatic Stress Disorder cannot be caused by chemical imbalances of brain chemicals. PTSD can only occur when a person survives a terrifying and life-changing ordeal. It used to be believed that only combat veterans suffered from PTSD. While many combat veterans do get PTSD, we now know that people can get PTSD after other life events. Examples include violent crime, abusive relationships, and even traffic collisions.

In most cases, PTSD isn't dangerous - though people struggling with it may have difficulty living their lives, meeting their commitments and responsibilities, and maintaining healthy relationships.

However, in severe situations, PTSD can be dangerous. People with the condition may have thoughts of suicide. Without a good support network and possibly the right professional help, they may hurt themselves or worse. People with PTSD this severe may begin their treatment in an inpatient format, meaning that they stay in a hospital or mental care facility until their condition is seen to have improved. This period allows them to begin the hardest part of their recovery in a safe environment where a healthcare team can fine-tune touchy issues like medication type and dosage.

PTSD can also be dangerous if people with the condition try to "self-medicate." For example, many people with PTSD develop alcoholism. Alcohol replicates some of the affects of feel-good chemicals in the brain so it can provide momentary relief from the feelings of anxiety and depression that can be symptomatic of PTSD. However, alcohol - in addition to making it even harder to maintain a healthy lifestyle and relationships - actually increases incidence and severity of depression.

How Is PTSD Treated?

PTSD is treated in different ways depending on the severity, the cause, and the individual. PTSD treatment can come through medication and/or therapy but the kind and course of these treatments can vary.

Medication may be a regularly taken prescription prescribed for a short time or indefinitely. These medications are usually the same as or similar to those used to treat anxiety and depression. Depending on the nature and severity of the condition and the preferences of the patient, they may get a prescription for "rescue medication" that can be taken in response to symptoms like panic attacks instead of being taken regularly. There are medications that should not be taken by people with PTSD, nor should they take medications in combination with other medications. They should let all of their care providers know about all of their medications - as well as herbal supplements - and diagnosed conditions to prevent dangerous combinations of prescriptions.

Other effective treatments include talk therapy. The goal of talk therapy for PTSD, at least initially, is less about curing PTSD and more about managing its symptoms. The therapist or counselor may begin by focusing on tools like identifying symptoms like anxiety attacks or depressive episodes and how to manage these symptoms with coping strategies. The therapist or counselor may then move on to more complete recovery though this depends on the event that caused the PTSD. Another common treatment to help heal trauma is Eye Movement Desensitization and Reprocessing, which is shown to be effective and must be done with a professional. Behavioral therapy, which is common for many anxiety and mood disorders, is another proven route to handling trauma. Some people with PTSD may not see a counselor or therapist in the one-on-one sense and go to group therapy instead.

Group therapies are usually presided over by a professional but focus more on individuals with PTSD sharing their experiences with one another. This is a great way for the patients to come to terms with having an emotional disorder as well as to learn practical coping and recovery methods from other people with the condition. Some people may "graduate" from one-on-one counseling to group therapy as they learn to manage and even overcome their condition. These type of therapy is usually free and offered through community groups rather than through hospitals. 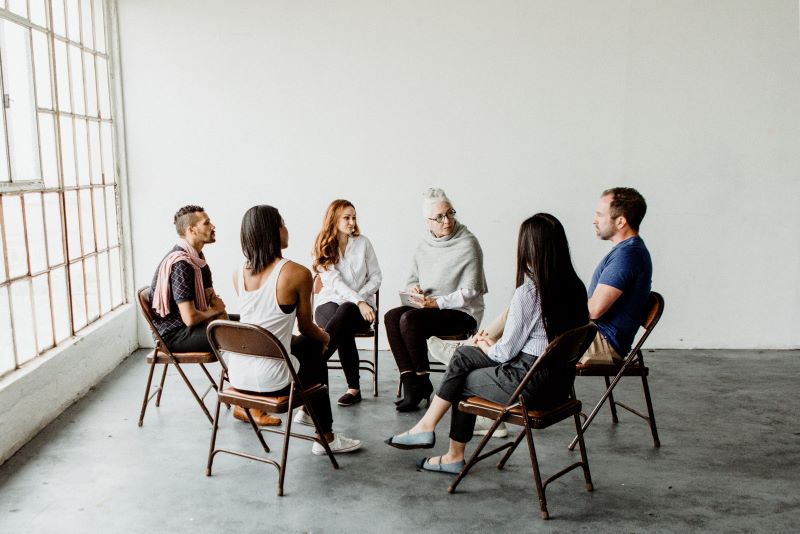 Could Comorbid Depression Be Holding You Back?
Find Out More By Talking To A Therapist

Finally, many people undergo both talk therapy and medication. Prescription medication taken regularly for PTSD make counseling more effective so many people with PTSD are in therapy for years, months, or even weeks before ending treatment or moving to a more relaxed treatment environment and schedule as discussed above.

Does PTSD Go Away?

How long it takes for PTSD to go away is a difficult question. The bad news is that some people, experts and sufferers alike, maintain that PTSD never really goes away. The good news is that most people do eventually learn to manage their symptoms and live happy and healthy lives. Some people recover completely and fully heal from their trauma.

How long this may take depends on the person, the patient, and the trauma that brought on their PTSD. People who suffered a traumatic event while doing something mundane, such as traffic collisions or violent crime may develop symptoms similar to phobias and be treated similarly. They usually overcome their most severe symptoms fairly quickly, partially because they are likely exposed to their triggers fairly regularly simply by living their lives. For example, victims of crime usually have a hard time avoiding the outside and people who have survived traffic collisions can rarely avoid cars for very long. This makes their conditions more difficult at first, but easier to overcome over all. Their symptoms may go away for the most part but may come back when something reminds them of the event, like passing the location where it happened or passing an anniversary.

People who survived more remarkable trauma like abuse or combat often have different symptoms and recovery rates. They may develop symptoms similar to anxiety and depression. They may take months or years of treatment before the worst of their symptoms go away or learn to manage them effectively enough to lead normal lives. As mentioned above, some take the attitude that PTSD doesn't "go away" so much as go "into remission." These people may continue going to PTSD support groups for their whole lives although they usually end up taking on more leadership-style roles in these groups.

Another reason that it can be difficult to tell whether PTSD is really "gone for good" is that sometimes symptoms from trauma can go away for extended periods of time before returning, sometimes because of a triggering event and sometimes seemingly out of nowhere. As a result, it can be important for people who have or have had PTSD to be open about it with people close to them and with their healthcare team. This allows people close to them to watch for symptoms returning and it can help prevent healthcare providers from prescribing medications that can contribute to the return of symptoms, especially depression.

Whether or not PTSD goes away, or whether it can, most people with the condition from their trauma do eventually return to happy and healthy lives through a combination of treatment and natural recovery. Whether you have PTSD or are supporting someone with PTSD, the important thing is to be patient and allow recovery to take its course.

Even if the PTSD seems to have gone away, keep an eye out for recurrent symptoms, even years after the initial event. It could be that symptoms never return, or they never go away but don't become problematic because of medication, management skills, or both.

It is important for people with PTSD to foster support groups, whether formal or otherwise. These should include family and friends but may also include counselors, therapists, and formal support groups like community organizations or veteran's groups.

If you or a loved one is struggling with PTSD and do not have access to treatment or are considering treatment but don't know where or how to start, online therapy may be a good place to begin. Previous Article
Are PTSD Support Groups Effective?
Next Article
EMDR: PTSD Treatment For Everyone
You Don't Have To Face Post Traumatic Stress Disorder Alone.
Speak With A Licensed PTSD Therapist Today
The information on this page is not intended to be a substitution for diagnosis, treatment, or informed professional advice. You should not take any action or avoid taking any action without consulting with a qualified mental health professional. For more information, please read our terms of use.