ADHD is not uncommon in school-aged children. Increasingly often, it seems children are being diagnosed with various disorders, including Autism Spectrum Disorder, ADD, and ADHD. As stressors continue to climb, for children and adults both, the incidences of mood, intellectual, and educational disorders are likely to continue climbing. Consequently, developing consistent, effective tools to help alleviate the symptoms of these conditions is of the utmost importance.

Although pharmaceutical interventions are often one of the go-tos in treating symptoms of these conditions, increasing bodies of research are looking for methods of treatment that do not possess as many potential side effects as pharmaceutical interventions, and that can be incorporated into the daily lives of children, adults, and families affected by these disorders without a lot of difficulties. Interestingly, exercise appears to be one such intervention. Is Your Child With ADHD Getting Enough Exercise?
Talk With A Licensed Therapist Now

ADHD is classified in a few different ways. Some classify the condition as an intellectual disorder, while others categorize the symptoms of ADHD as a neurological or developmental disorder. Whatever the umbrella term used to describe the condition and its symptoms, ADHD is highly impactful to those it affects.

Broad ADHD symptoms include inattention, hyperactivity, and impulsivity. Put into practice, these symptoms often manifest as difficulty concentrating, difficulty sitting still without fidgeting, inability to control verbal or physical outbursts, and experiencing sensory overwhelm. All of these can create an environment that makes learning and engaging with others extremely difficult and can create problems both in school and in the workplace as children grow into adulthood.

Who Does ADHD Affect?

The greatest risk factor involved in ADHD is having a family member with a diagnosis of ADHD or a similar disorder. A family history of anxiety has also been linked to the advent of ADHD in a child. Like most disorders, prompt diagnosis and treatment are key in minimizing the harmful effects of ADHD.

ADHD can affect children and adults. Most commonly, children do not receive a diagnosis of ADHD until they have reached school age, as the symptoms of ADHD do not often manifest as problematic until a child is placed in an academic setting, where sitting still, focusing, and engaging in a task are required for several hours at a time. During play, children with ADHD are usually able to cope quite well with their disorder and do not require immediate treatment.

Adults with ADHD might not receive a diagnosis at all but will likely experience difficulties in relationships and in the workplace. Because ADHD can negatively impact your ability to focus, deadlines often go unmet, responsibilities are forgotten, and procrastination is a rule of behavior, rather than an occasional indulgence. In relationships, people with ADHD can suffer, as they are likely to forget important dates, misunderstand emotional cues due to distraction, and may not be able to comprehend the severity of a problem relayed to them by their partner.

Why Is ADHD Problematic?

For some, the symptoms of ADHD are extremely mild and do not require intensive therapeutic or pharmaceutical intervention; instead, they can be managed through organization tools and personal interventions. For others, however, the effects of ADHD are severe and dramatic enough to require several forms of intervention, including behavioral therapies, medication, lifestyle changes, and supplements.

ADHD's greatest source of trouble comes from the struggle to concentrate, engage, and control impulses. In infancy and young childhood, these issues might not be terribly problematic, but in adulthood, each of these symptoms can have long-lasting consequences, including addiction, debt, job loss, and isolation from peers. Over time, the effects of these manifestations of ADHD can prompt the onset of depression, anxiety, and other mood disorders, creating an even greater seed of discord in your life.

How Is ADHD Treated? ADHD is usually treated through behavioral therapies, interventions, and pharmaceutical drugs. Therapies might include Occupational Therapy (OT), which can help children with sensory disorders-conditions frequently co-morbid to ADHD-develop decreased or increased sensitivity to stimuli. Occupational Therapy can help children with ADHD learn to sit and attend to a task, how to write effectively, and how to tune out distractors. Some families might also choose to use therapies traditionally used for other conditions, such as Cognitive Behavior Therapy, which can help rewire the brain to develop healthier self-esteem and coping mechanisms.

Interventions for ADHD might include IEP and 504 Plans for educational settings. These plans may allow students to receive services (including OT) during school hours, may allow children the opportunity to use fidget toys to help keep focus, or may instruct teachers to provide children with better seating, perhaps away from windows, doors, or areas with a large number of stimuli.

For some, the symptoms of ADHD disrupt daily life enough that pharmaceutical intervention is required. In these cases, medications are usually used to sedate some of the excess energy unique to ADHD, which can help increase focus and relieve impulsivity.

While all of these treatment modalities can be useful in treating and managing symptoms of ADHD, the goal is to create a treatment plan that is in the best interest of the individual, which might not include pharmaceutical medication. For some, alternative treatments are sought after first, and more drastic measures are engaged as a last resort. For these families, exercise as a form of therapy might provide some relief from the symptoms of ADHD. 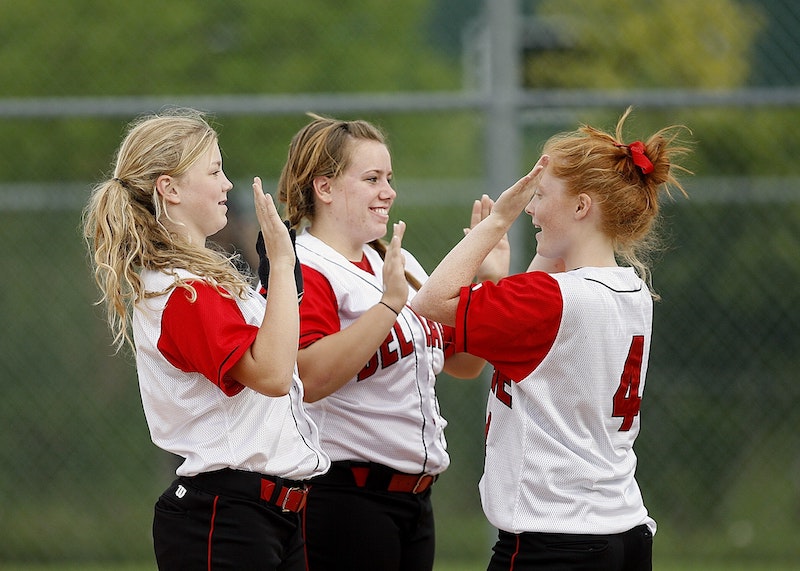 Is Your Child With ADHD Getting Enough Exercise?
Talk With A Licensed Therapist Now

Exercise is a healthy addition to anyone's routine, whether that exercise is more strenuous as in the case of weightlifting or long-distance running, or a calmer engagement, such as yoga or stretching. Even in calmer, gentler forms of exercise, energy is being utilized in a healthy way and can contribute to a calmer, more stable vestibular system and can help ease tension, anxiety, and impulsivity.

Using specific forms of exercise for ADHD, however, might be the key to effectively reducing the hyperactivity associated with the condition. Simply running back and forth for an hour is unlikely to have long-term effects on ADHD symptoms, though it may eat up energy for a brief period. Long-term ADHD relief is more likely to come about through using disorder-specific exercises designed to improve neural connectivity, social connections, and body awareness.

Although all physical activity is likely to aid in some way, there are specific exercises and forms of exercise that have demonstrably healthy effects on ADHD symptoms. Biking and swimming are both useful forms of exercise, and both are often popular with children. Simply biking or swimming for 30 minutes per day, 4-5 days per week, can drastically reduce the symptoms of ADHD. Martial arts can also help children with ADHD, as the physical components work alongside mental components to improve mental acuity and physical discipline. Dance, gymnastics, and yoga are all useful forms of exercise as well, as these involve complicated movements that require both physical and mental engagement to complete.

Simply getting outside and playing on a playground or in the grass can certainly assist in mitigating the symptoms of ADHD. These activities alone, though, may not provide the stimulation and prolonged brain-body connection more focused and intensive exercise routines provide. If possible, work up to a 30-40 minute exercise routine. For children, exercise can be made more engaging and entertaining by giving exercises animal names or engaging in the exercises, too. For adults, exercise might be best engaged-at least initially-with an accountability partner or even an accountability app, which can provide an impetus for movement.

Using Exercise As A Treatment For ADHD Although there are still emerging studies surrounding the notion of exercise as a treatment option for ADHD, the area shows immense promise for children and adults with ADHD. As rates of ADHD continue to increase, and the symptoms of ADHD continue to interfere with day-to-day living, finding a reliable solution is paramount. With a daily routine of 30-40 minutes of exercise providing a powerful stimulant to the human brain, without the potential side effects of synthetic chemical interventions and the price tag of intensive therapy, exercise is a solution that therapists, families, and individuals can't afford to pass by.

Previous Article
How To Help A Child With ADHD: 6 Tips
Next Article
What Is Anxious ADD?
For Additional Help & Support With Your Concerns
Speak with a Licensed Therapist
The information on this page is not intended to be a substitution for diagnosis, treatment, or informed professional advice. You should not take any action or avoid taking any action without consulting with a qualified mental health professional. For more information, please read our terms of use.