Neurosis is a condition where an individual feels some sort of mental distress, so they begin to act in ways that would not be considered “normal” by the general public. Unlike schizophrenia or psychosis, neurotic disorders do not consist of delusions or hallucinations.

Although it’s a relatively common term, neurosis is no longer diagnosed as such. Instead, it’s generally referred to as an anxiety disorder or depression. Furthermore, people who are described as “neurotic” are not the same as those who experience neurosis. Neuroticism refers to a personality trait (being “neurotic”), while a neurosis is a mental condition. In this article, we’ll look at neuroses and psychoses, so you can understand how they might affect you.

There are numerous types of neurotic disorders, and as we become better at diagnosing them, we’re realizing they’re quite common. These include:

Of the disorders listed, anxiety is perhaps the most common. It’s an involuntary response to depression or stress characterized by a general sense of discomfort that accompanies feelings of fear or uneasiness.

Phobias, on the other hand, are extreme fears that are often irrational. For instance, someone who is afraid of vomiting is said to be “emetophobic,” while someone who is afraid of leaving the house is said to be “agoraphobic.” Because a person can have a deep-seated fear of just about anything, there are likely more phobias out there than we know, and new phobias can, in theory, pop up every day.

Contrary to popular belief, Obsessive-Compulsive Disorder (OCD) is more than just counting things obsessively or turning the stove on and off ten times before you leave the house. In reality, a person with OCD regularly experiences negative, involuntary, and intrusive thoughts that cause them to develop anxiety. This feeling of anxiety then causes the person to behave irrationally, which results in the kinds of compulsive behavior we associate with the condition.

For example, while engaged in an activity, a person with OCD may experience a sudden and involuntary thought that they left the stove on, so their house is burning down. To make sure this doesn’t happen, they go to the stove and check to see if it’s off. Even though it’s definitely off, they have to keep turning the stove on and off to make sure it’s truly off because they worry they’re mistaken.

A person with OCD may have to repeat the same action several times before they feel satisfied enough to leave the house, and by then, they may be late for work or a social engagement.

Finally, Post-Traumatic Stress Disorder (PTSD) is a well-known condition that often plagues soldiers when they return from war. Some veterans experience flashbacks, particularly when something happens that mirrors something they experienced on the battlefield. For example, they might be triggered by fireworks going off on the Fourth of July. While PTSD is most commonly associated with veterans, it can and does affect anyone who has experienced some sort of trauma in their life.

Because there are so many different neuroses, there are also a number of symptoms associated with them, though these vary according to the condition. Some of the more common symptoms include:

Neuroses can be summed up more generally as an impediment preventing a person from properly adapting to his or her environment. Sadly, it may be difficult or even impossible for a person living with neurosis to cope with change. These individuals also find it difficult to be happy because their condition creates such fear and anxiety that they feel like they can’t truly experience life as it was meant to be.

Even when they want to get better, many people feel embarrassed by their neuroses or fear the stigma associated with neuroses, so they delay getting help or avoid it altogether. According to an article in the International Review of Psychiatry, at least 25 percent of the people living with a neurotic disorder choose not to get help. If you’re part of this group, know that you’re not alone in your neuroses. Every single human being has one more or neuroses, but some are more serious than others. When it starts to interfere with your quality of life, you need to get help.

Many people try to combat their neuroses on their own, but sometimes they need to work with a mental help professional. If you’re in this situation, there is absolutely no shame in seeking help. Talk to your doctor, so they can refer you to the appropriate person. There are several different treatments for people with neurosis, all of which can be administered by a licensed psychologist or psychiatrist. These include:

You may also be interested in trying a creative therapy that uses art or music to combat invasive and negative thoughts.

In conjunction with therapy, you can also try the following things at home:

As we look at neurosis, it’s important to understand what it is and what it is not. Neurosis is essentially the opposite of psychosis because a person with psychosis has lost touch with reality. People with a neurosis are fully rooted in reality, even if they experience and imagine it more strongly, which can lead to their increased levels of unease and anxiety.

Those with psychosis, on the other hand, have difficulty separating what’s real from what’s not. Unlike neurosis, psychosis often does result in delusions and hallucinations.

Psychosis has a number of different origins. For instance, it can be the product of a person’s environment or the sign of a mental illness. It can even be caused by things like sleep deprivation or the use of drugs and alcohol. In addition, some women can experience a form of psychosis known as “postpartum psychosis,” which typically sets in within a few weeks of giving birth.

Another important distinction between neuroses and psychoses is that neuroses do not affect a person’s ability to carry out their everyday activities, whereas psychoses do.

Because early intervention is so important, you should know the early signs of psychosis, so you can seek treatment immediately if you recognize them in yourself or someone else.

Early signs of psychosis can include:

You should also be aware of the signs associated with a psychotic episode. If you have experienced any of the following, discuss the situation with a professional before your potential psychosis gets any worse:

If you notice any of these symptoms, a mental health professional can evaluate the signs you report and your behavior to determine whether you are, in fact, dealing with psychosis.

Whether you’re struggling with a neurosis or a psychosis, it’s best to speak to a doctor or a therapist about your experiences. If you’re skeptical, you can always reach out to one of BetterHelp’s experienced and licensed counselors for guidance, support, and more information.

They can answer any questions you have, help you navigate what may feel like a confusing and difficult period of your life, and work with you to figure out next steps, so you can get back to being the person you were before. Thanks to the BetterHelp platform, you can even meet with this counselor from the comfort and privacy of your own home or wherever you have an internet connection. Below are some reviews of BetterHelp counselors from people experiencing similar issues.

“Dr. Spohn has been unceasingly positive, supportive, and smart in helping me confront difficult to discuss issues and convince me to actively support my goals. With her incredibly kind advice, I’ve been able to achieve things I once thought impossible. She’s helped me form beneficial habits and guided me into modifying my incredibly negative thought patterns into better, kinder ones. Jamie has truly been my lifeline at times and I can’t imagine how much worse off I would be if I hadn’t been working with her.”

“Shana has helped me tremendously over the past few months. She has assisted me in changing my thought patterns and bad habits. She is very caring, a great listener and is not judgmental. It is clear how much she cares about her patients. I appreciate her and would recommend her to anyone searching for a counselor.”

If you’re living with a neurotic disorder, you may feel hopeless and riddled with anxiety. You may also wonder how you’ll ever be happy or successful, how you’ll raise your children, or how you’ll maintain lasting relationships. But all hope is not lost!

Many people have been in your shoes, and many people others will follow you on this path. The trick is to get help as soon as you notice something is off and to remain committed to your treatment.

Whatever you’re experiencing, help is available. You can get your life back with the right support and the right tools–take the first step today.

Next Article
What Is The Neuroticism Test? Big Five Personality Test For Someone Who Is Neurotic
For Additional Help & Support With Your Concerns
Speak with a Licensed Therapist
The information on this page is not intended to be a substitution for diagnosis, treatment, or informed professional advice. You should not take any action or avoid taking any action without consulting with a qualified mental health professional. For more information, please read our terms of use. 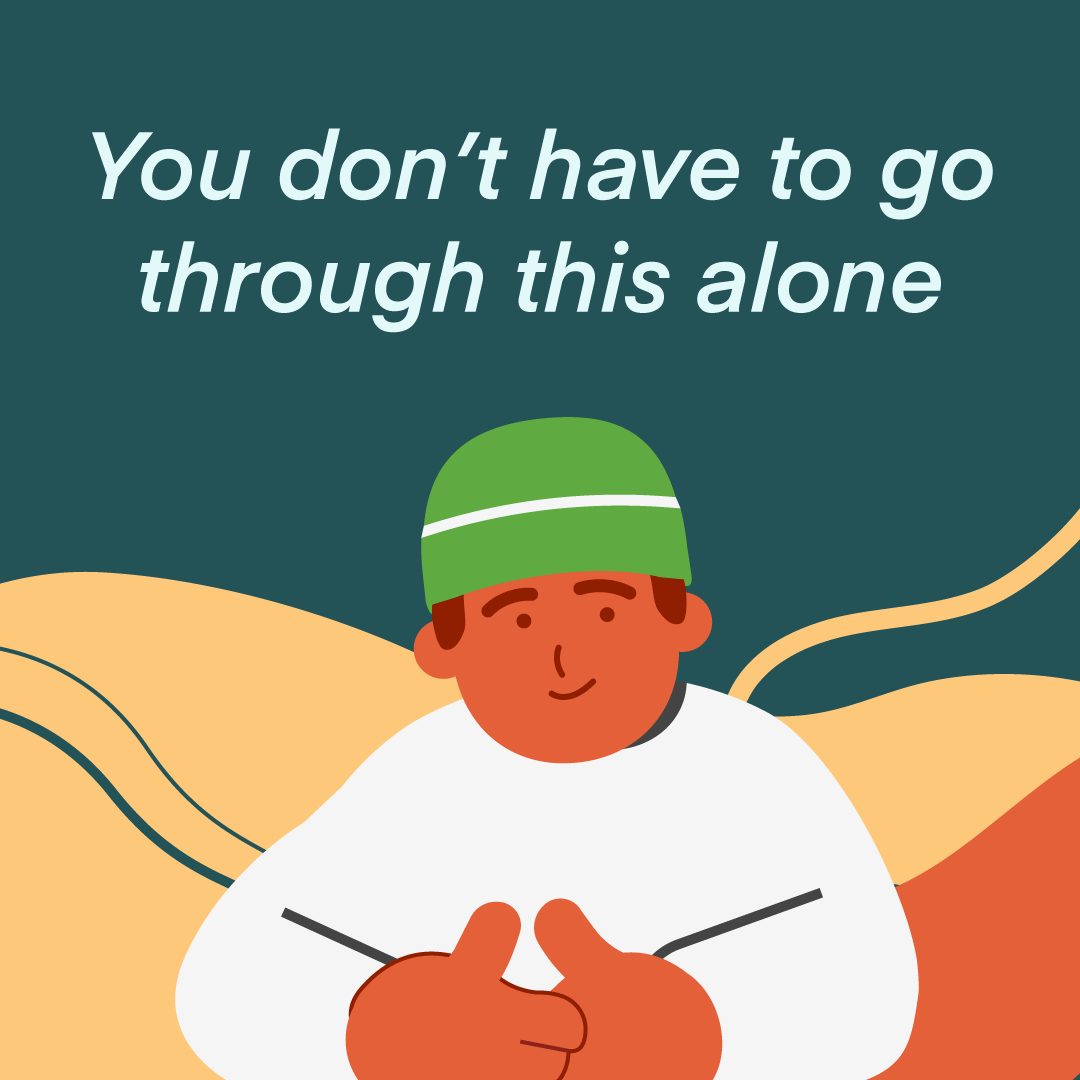