Advice Home > Phobias > Coping With The Fear Of Blood 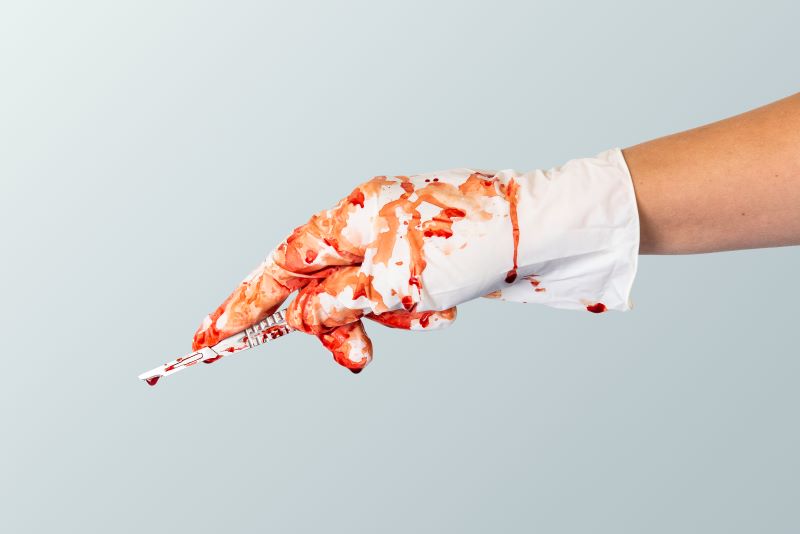 Hemophobia, or the fear of blood, can be a difficult fear to live with. There is the possibility of seeing blood every day. For example, you might be on the bus and notice a child with a bloody nose. Or a co-worker could get a cut while moving a file cabinet or working with heavy machinery. If you have children of your own, they may skin their knees on the football field or the sidewalk.

Hemophobia can be a challenging fear to face. However, the fear of blood is something many people struggle with, so if you have this fear, you're not alone.

Severe cases of hemophobia can cause physical reactions that are not seen with other phobias. For example, someone who is afraid of blood may faint at the sight of it, which is known as vasovagal syncope.

If someone is afraid of blood, it's probably because something traumatic happened during childhood or adolescence. Traumatic events that occur during these stages of development are more likely to cause hemophobia than being genetically predisposed to the fear. That means that unlike some other phobias (e.g., the fear of snakes), the fear of blood is one that is probably not inherited or passed down through generations. 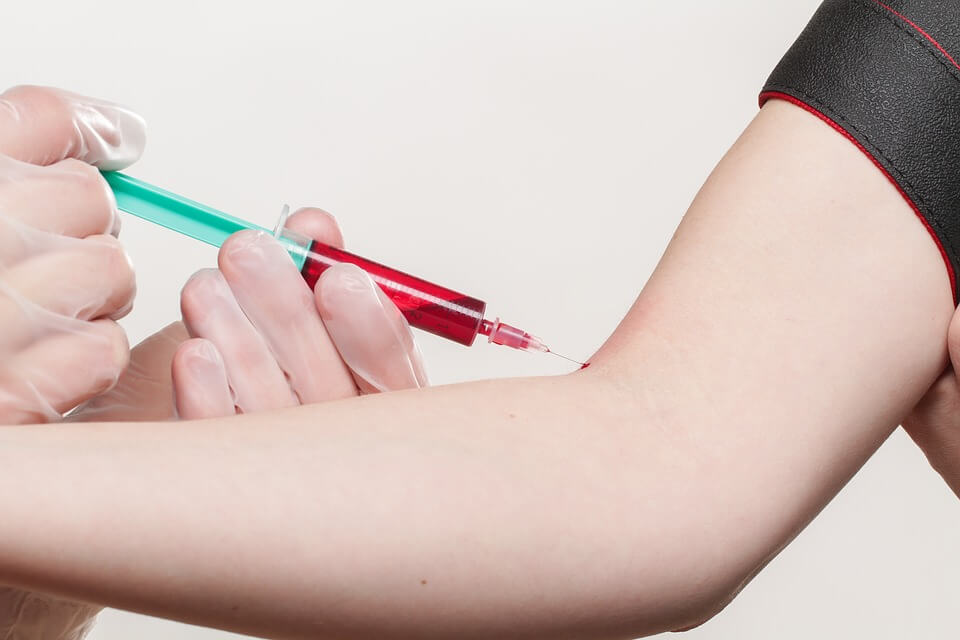 Although hemophobia can result from trauma related to seeing blood, experts believe that it is not always an event specifically involving blood that leads to hemophobia. For example, a person could have had a frightening experience during which they saw the color red, and it translated to a fear of blood.

Bleeding can be scary, because it's a sign that something is wrong with the body. When people are afraid they're sick, or if have chronic hypochondriasis (the fear of becoming sick) or nosophobia (the fear of developing a specific disease, like cancer or diabetes) this can affect the entire body. When you're afraid of contracting a particular ailment, that fear can lead to a fear of the very germs that can lead to sickness (mysophobia) or, in the extreme, the fear of death (thanatophobia).

Hemophobia and mysophobia are closely linked, as a person may be afraid of catching germs specifically from someone else’s blood. 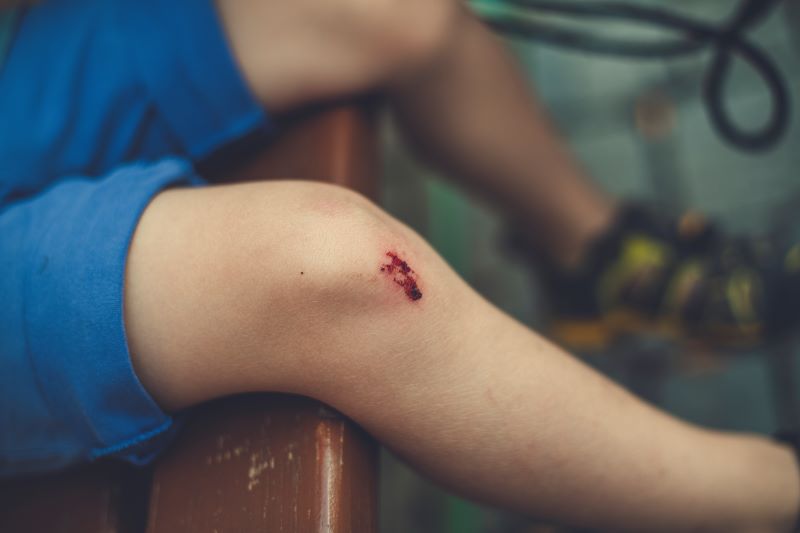 The sight of needles can trigger someone's hemophobia because they're afraid of watching the blood go into the syringe. In addition to needles, there are several other "triggers" that can exacerbate a person's hemophobia.

For instance, Halloween decorations depicting blood, though fake, can still trigger someone's homophobia. Images on television, such as those found in gory horror films or television shows involving murder, can do the same.

When a person experiences hemophobia, they tremble at the sight of blood, usually after a sudden drop in blood pressure, and they feel faint and turn pale.

Someone who is afraid of blood may also experience these symptoms when seeing the blood of an animal. It doesn't have to be human blood to evoke a strong reaction. 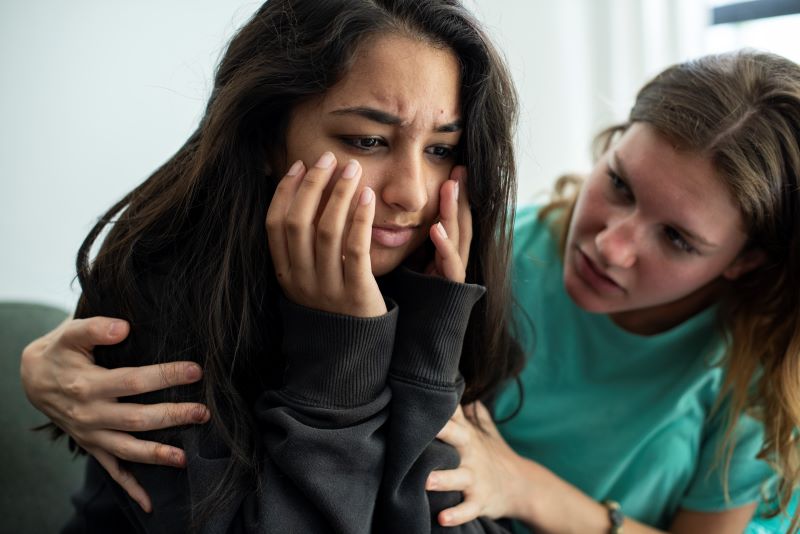 A person who has hemophobia may prefer to live a sedentary lifestyle. They may choose to avoid activities such as exercise or sports for fear of injury, which might lead to bleeding. They may worry that if they bleed, it could land them in the doctor's office or a hospital, where they might see even more blood. Thus, this fear can significantly limit one’s enjoyment of life.

Another side effect of hemophobia is depression, which goes hand in hand with a sedentary lifestyle. Not being able to get out in the world and do the things you want to do can lead to depression as well.

If you struggle with hemophobia and are not sure what to do, consider reaching out to one of our BetterHelp counselors for assistance. 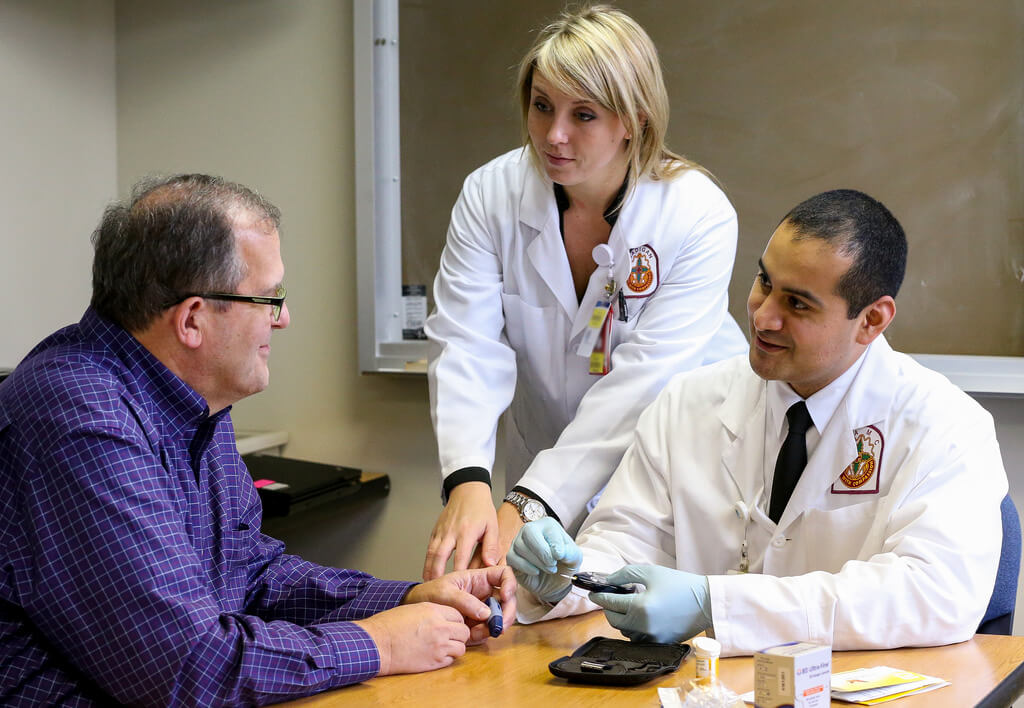 One treatment for hemophobia is to increase an individual's blood pressure. This intervention decreases the chance that their blood pressure will drop and they will faint.

In addition, the applied tension method works well with hemophobia. This is in comparison to relaxation techniques, which are effective with those suffering from other phobias. However, hemophobia is different from other phobias, as the top priority is to prevent the person from fainting. Squeezing a person's muscle groups into knots is one way to raise their blood pressure. It works well in situations where a person is at risk of fainting, such as when receiving an injection or getting blood drawn at a doctor's office.

Tips For A Successful Application Of The Applied Tension Technique

If you're getting used to using the applied tension technique, you may still be at risk of fainting when placed in a situation involving a hemophobia trigger such as getting your blood drawn. If you do start to feel faint, you will recover faster if you lie down and elevate your feet.

It's important to remember that tensing your arm while receiving an injection can make the injection more painful. Instead, relax the arm that is receiving the injection, and focus on tensing the other parts of your body to avoid fainting. This technique may be difficult to master at first, so it helps to practice before getting an injection.

You can use applied tension on the arm that is getting the injection both before and after the procedure; however, you need to remember to release the tension in that arm while the needle is administered. If, during the injection, you notice yourself developing a headache while using the applied tension technique, try to reduce the amount of strain you're putting on your muscles or the time you spend tensing them.

Above all, do not get discouraged. Applied tension may sound simple, but it's crucial to practice both the timing of the technique and relaxing the arm that's receiving the injection while simultaneously tensing the rest of your body. It's a tricky skill to master, but keep working at it and you'll get better and better. Sources:

Cognitive behavioral therapy (CBT) is a therapy approach that helps people change negative thoughts into positive ones, resulting in more positive emotions and healthier behaviors. CBT is considered front-line treatment for anxiety, and research shows that online CBT (iCBT) can treat anxiety disorders just as effectively as in-person therapy. Not only is online CBT as effective as face-to-face therapy for anxiety disorders including phobias, but online treatment is both cost-effective and successful, with treatment effects maintained at one-year follow-up.

As discussed above, CBT with a licensed therapist is an excellent way to treat phobias, including fear of blood. But some phobias can make it difficult to attend in-person therapy. This is where online therapy comes in. You can access BetterHelp’s platform from the comfort and privacy of your own home. And there’s no need to sit in traffic or take time out of your busy workday to drive to your appointment; you can speak with your licensed therapist from wherever you have an internet connection. BetterHelp’s licensed therapists have provided CBT for anxiety disorders including phobias. Read below for some reviews of BetterHelp therapists from people experiencing similar issues.

“Kelly is quite literally the best thing that has ever happened to me. She understands me and my phobias in a way that no one else ever has. She is always there to listen when I need her and I’m so thankful for this service and opportunity to work on myself with a professional.”

“Im very thankful I was matched with Julian, he has brought a difference to my daily life. He has helped me challenge fears I wouldn’t be able to over come. He listens to my concerns, thoughts, and problems and helps me understand what can be done and how to deal with them in a healthier way to avoid negative feelings. Julian really cares and shows it with his work.”

What A Fear Of Long Words? Can People Really Have This Phobia?

What Is Aichmophobia?
For Additional Help & Support With Your Concerns
Speak with a Licensed Counselor Today What Is An Irrational Fear, And How Do You Deal With It? Monsters In The Dark: Understanding Teraphobia Phobia Definition, Symptoms, And Treatments What To Know About The Fear of Women What A Fear Of Long Words? Can People Really Have This Phobia? What Is Aichmophobia?
The information on this page is not intended to be a substitution for diagnosis, treatment, or informed professional advice. You should not take any action or avoid taking any action without consulting with a qualified mental health professional. For more information, please read our terms of use.
Your session is about to expire!