What Does "Opposites Attract" Mean For My Relationship?
Ask A Licensed Relationship Counselor.

If you're confused about who you're attracted to and who might be right for you to date, you're not alone. Dating can be exciting, overwhelming, and frustrating-sometimes all at once. A therapist or relationship counselor can help you identify the qualities in others that lead to happy and successful relationships, set healthy boundaries, and even develop friendships.

Opposites attract if you're dealing with magnets. With people and relationships, it gets complicated. This age-old saying "opposites attract" dates back to at least the 1800s, and is translated into many different languages, and shared in many cultures. But so is the adage, "birds of a feather flock together." The theory has been studied for years, and modern science continues the exploration, aiming to pinpoint which saying is true when it comes to human interaction.

On TV, we watched the beautiful Belle fall in love with the Beast. We gushed as the underprivileged and uneducated Cinderella was swept off her feet by the rich and titled prince. We rejoiced when Ariel the mermaidsearched for ways to get rid of her fins and marry her Prince Eric. Lucy and Ricky, Bella and Edward...television is filled with portrayals of people who are wrong for each other.

Are people with opposite personalities, beliefs, and physical traits are drawn together like opposite poles of a magnet? Why do opposites attract-if they attract at all?

Although over 80% of people believe opposites attract, it's not necessarily true. It's not 'opposites' that draw us to our romantic partners but certain personality traits, similarities, and even biological cues.

In the 1950s, a sociologist by the name of Robert Francis Winch led a study on mate selection to answer the question, "Do opposites attract?" During his investigation, Winch interviewed married couples and examined their relationships as well as their personalities and needs.

Based on his research findings, Winch argued that to make a marriage work, aspects of one's personality, especially socially related traits like aggressiveness and assertiveness, should complement each other. For example, a very outgoing husband would be content with a more introverted wife. Winch's research suggested that it's not that opposites attract, but complementary traits.

Further research on complementary personalities suggests mixed results. A few studies parroted Winch's findings, but most studies, in a pool of over 300, found that the opposites largely do not attract. People are pulled to those who they share similarities with in one way or another. Still, Winch may have been onto something with his complementary notions, since some later research does suggest that partners prefer their spouses to express certain personality traits that they may not exhibit.

For example, a 2007 study by Markey & Markey found that husbands who are aloof or standoffish are less satisfied with their marriages when their wives were also cold. These men preferred their partners to be warm on the affiliation scale. Wives who were on the "colder" end of the affiliation scale also prefer warm partners. In this way, opposites do appeal to one another. But do opposites attract in all areas of personality?

Surprisingly, the findings weren't the same for dominance/submission. The Markeys' results indicated that submissive wives were happiest when they had husbands who were also submissive. This pattern continued through the rest of the research. Outgoing partners prefer outgoing partners, affectionate partners appreciate and desire affection, and so on.

Birds Of A Feather

So, to answer the question, "Do opposites attract?", Not really. Similarities in age, intelligence, religion and education level are the blocks that build the foundation for a healthy relationship. Even couples who differ in race, culture, and other significant areas will have things in common on a deeper level. Remember the 313 studies we mentioned earlier? A majority of them found that birds of a feather do flock together. A 2013 study by Eharmony mirrored these findings. An investigation of the matchmaking site's matching system results showed that even when opposites are initially attracted, it is similarities that make for a long-term relationship.

As psychologist Dr. LeslieBeth Wish puts it, the formula for a healthy/happy couple is "common values and ethics." This is not necessarily the case with personality. This brings us to another interesting finding: there are certain personality traits that people are attracted to regardless of their personality types or even physical beauty.

Kindness Is A Magnet

I'm sure you've heard the saying that "nice guys finish last," but according to science, this isn't always accurate.

A 2014 study conducted at the Huazhong University in China found that having a positive attitude (being honest, and kind) increased the attractiveness of one's face. During the study, a group of men was split into groups and shown women's faces with no descriptors. Another group was shown the same faces but also told about their personality (i.e., kind, shallow, etc.)

The findings indicated that the standards of beauty for the second group of men were swayed by the positive descriptors regardless of their personalities. So, it may be that those who are cold or unkind aren't drawn to nice partners because they are opposite but because we as humans are attracted to kindness.

A 2010 study had similar results with body types. During the experiment, men were separated into two separate groups. One group was provided only pictures of female bodies but no other non-identifying information. The second set of men was provided with positive personality information for some of the photos they viewed and negative for others.

The first group presented a very narrow view of which body types were considered attractive. The second group's perception was broadened by the information about who was kind and who wasn't, leading them to identify a greater variety of body types as appealing.

But more than personality, there's something else that attracts us to our future spouses, and it's right under your nose.

So much scientific research focuses on how we choose our partners, but what if we don't "choose" at all, at least not consciously? This could be a whole article in itself since there is so much recent research on the topic of scent attraction.

Think of it in this scenario: You're at a bar (or for bookworms, a library) and the hot guy sitting across from you catches your eye. You start chatting and feel instant chemistry. What you don't realize is that invisible forces are at work in unusual places. Before you know it, you're in love with "first smell."

The search for human pheromones has gone on for many years. A pheromone is a chemical secreted in sweat. Scientists have long thought that pheromones played a role in sexual attraction and now there is scientific evidence. 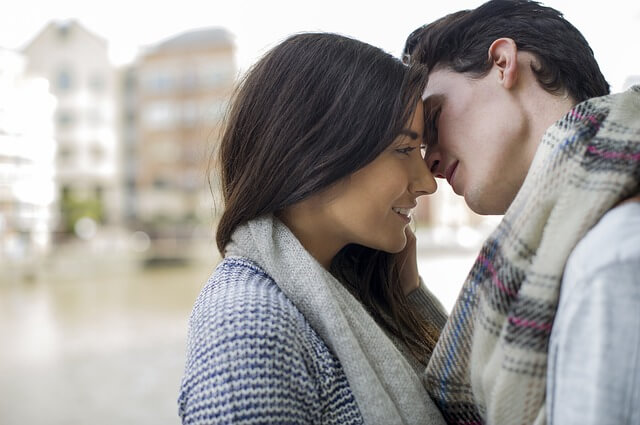 What Does "Opposites Attract" Mean For My Relationship?
Ask A Licensed Relationship Counselor.

In one study, women judged men's attractiveness through smelling their t-shirts, and in another, men were able to sense a woman's fertility through smell. The participants were attracted to various scents, suggesting that beauty truly is "in the eye of the beholder".

Even if we accept the researchers' conclusions that opposites don't attract as fact, you may be wondering how all the good girl/bad boy couples in the world fit into the mix. We all know at least one boyfriend and girlfriend, or husband and wife, that seem to be opposites. And what about those who date people that are wrong for them, over and over again?

These types of relationships are different from the ones that happen organically. Sometimes, people who are seeking relationships have formed trauma bonds, which affects the way they approach relationships. These people may struggle with self-esteem, confidence, and healthy relationship boundaries.

Science suggests that they are making decisions based on "attractions of deprivation." They might have a deep drive to seek out love and approval from their partners, even if the partners aren't capable of providing. Their fear of abandonment can make it difficult to walk away from situations, even those that are not ideal. Back and forth they go, in and out of relationships with people that we have nothing in common with but can't seem to let go of. In this case, opposites might attract but not for a good reason.

What Does This All Mean?

Scientific data means nothing if we can't connect it to our lives. So, if opposites don't attract after all, what does that mean for us?

The takeaway isn't about what attracts us to our partners but what will help us build the best possible futures. If you find yourself attracted to like-minded people with similar qualities at their core, you're probably on the right track. On the other hand, if you find yourself dating people who don't seem right for you, it might be a good idea to seek guidance. There are ways to break this cycle, and a qualified therapist can help guide you through the process. BetterHelp counselors are available at any time to discuss your specific issues and help you work through your problems.

Here are some of the most frequently asked questions that people tend to have in regards to whether opposites attract.

Every relationship requires a balance to work. For some people, this balance may come from teaching their partner something new by being different in almost every way possible. For example, a free-spirited person might have fun helping their critical, shy partner learn more about their interests and become engaged when socializing.

On the other hand, the introverted partner will tend to help the extroverted partner sit back and watch a little more in life. Both partners influence each other, and the lessons learned in the relationship.

Although you can’t expect any relationship to work out with some hard work and passion, research suggests that opposites can get along well. Opposites attract if the timing is right and if the people are right. Even some opposites can get along. After all, Paula Abdul has a whole song and music video about a couple just like this.

Should I date someone who is the opposite of me?

In the end, we don’t pick our partners out from a list (unless maybe from an online dating site). We may have an idea of the gender we want to date, lessons we’ve learned from our past, and of course, an idea of the differences we will and won’t accept in someone else.

However, we often don’t have a choice during our search of whether the person we fall for is a good mix with us. It may just be that they are the opposite of you. Although these traits can enhance opposite traits in yourself, some people may feel uncomfortable with someone who doesn’t relate to them in interest.

However, if you know this person as a friend, or they’re someone you see a lot (like a fellow student), you may be more willing to give it a shot. Watch how they interact with you and try not to let past experiences get in the way of potential love during your search. You might just find that you’re not just a wild pair, but you’re soulmates as well.

Of course, it’s also fine if you find out that you prefer to date someone similar to you. You don’t have to follow “life goals” that don’t match your vision for your relationship. Sometimes, your past is right, and it’s time to move on and try something new. For example, do you want to date someone who hates music when music is your life and you work at a music store? Imagine dating someone who groans every time your favorite song or mix comes on.